I recently traveled to downtown Los Angeles for a day of street shooting and while there met this fellow while he was sitting on a bench in front of of the main LA library reading a book. Our conversation began with him telling me about his book and that turned into a rather lengthy and scholarly discussion of the veracity of that which one reads in history books.  It was enjoyable having such an enlightening conversation with one who was obviously a street person. 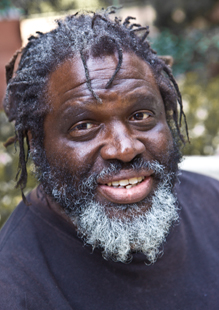