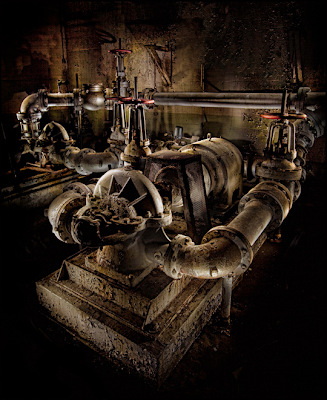 Take it away, Ron!

Several years ago Eric Curry was a guest speaker at my camera club. He first showed us some of his images and I was totally blown away by them, particularly with the lighting. I had never before seen anything quite like it. He then proceed to tell us he shot illuminating his subject with a powerful spotlight, taking many exposures, each exposure illuminating only a specific portion of the scene, and then he would combine the exposures together in Photoshop.

With nothing more than that, I proceeded to experiment to emulate a similar technique. It took some time and numerous failures, but I eventually came up with a somewhat unique style of my own using light painting techniques.
Above is my first serious attempt. I shot it five times over about as many nights before I was satisfied with the results. Many people think it is still my best effort. I got lucky with it because it inspired me to further aggressively pursue the technique. This image was illuminated with a small $2.50 flashlight from Home Depot. I took 178 exposures (but ended up using only 125 in the final image). Each exposure lit only a small portion of the scene. The exposures were then layered up in Photoshop and each layer was gently tweaked to fit into the overall image. Yes, it is a lot of work.
Because my particular style works well with old machinery, I spend considerable time searching for candidates to photograph. It turns out that a great deal of the enjoyment is in doing the searching.
With my lighting technique I must shoot in the dark of night. About half of all my shots have been where I have surreptitiously snuck into some location to do the shoot. Seldom have I been caught, even though I spend about 45 minutes with each shoot shining my flashlights around. 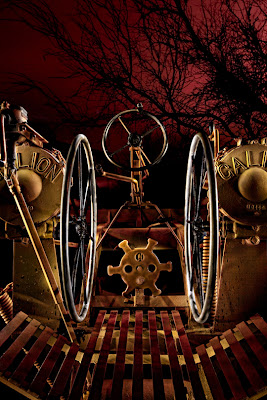 I took the above image in an outdoor exhibit of mining equipment south of Tuscon. It is of a non-powered road grader (had to be pulled with a tractor).  Up until this time I had always waited until total darkness before I began shooting. This night I had several shots to do so I started a little early and when I combined my many long exposure images I saw that I got the sunset appearing through trees in the background and thought it significantly improved the image so after that I have attempted to do it whenever possible. This was part of the display at Nevada City, Montana, a largely recreated ghost town. Sadly, I returned six months after I did this shoot to provide photographs to the officials administering the community only to find that the crane had been cut up and trashed. I mentioned before I used a simple, small flashlight. I still usually do, but with this one I had to use a spotlight to reach the top. 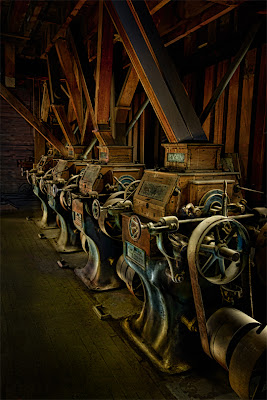 Above is one of my latest works. I learned of an old flour mill and negotiated my entry to it. It was a five story tower and I got quality images on four of them. I was actually locked in overnight. I find that most people owning or managing old artifacts are generally quite receptive to giving me access to photograph, with the understanding that I will provide them with photographs.
You can see more of my work at my website.
One of the galleriesis exclusively of my light paintings.Ron Matson
• • •
Thanks Ron, great job!
Explore the light,
Rick